This week all my library holds seemed to come in at once–I’ve got two more to pick up this afternoon that aren’t even on this list!–so I’ll be reading like mad to keep up. It’s a good thing, then, that I’ve picked out three tightly-plotted coming-of-age stories that promise to keep my eyes glued to the page from start to finish.

the premise: A father and daughter, both Ethiopian immigrants, flee Boston for an island commune after the daughter becomes entangled with a parking lot attendant named Ayale–a hustler and “unofficial king of Boston’s Ethiopian community,” according to the inside flap. The Parking Lot Attendant is a suspenseful coming-of-age story about immigration, national identity, and the choices and unforeseen consequences that shape all of us.

why I’m excited: This is a slim book–only 240 pages–that promises to pack a punch; it’s already received praise for being an unusual and interesting take on the coming-of-age story, a really saturated sub-genre. I’m particularly excited to read about the commune aspect–I’m fascinated by communes and off-the-grid living–and about the narrator’s struggle to navigate her Ethiopian identity in America.

the premise: A mother and daughter live out of their car at a trailer park in central Florida, the daughter Pearl in the front seat, her mother in the back. It’s a difficult life made more difficult by the intoxicating, menacing presence of guns: guns owned for all sorts of reasons and guns that trigger a shocking act of violence that turns Pearl’s life upside-down. (P.S.: isn’t it so funny that this cover looks so similar to The Parking Lot Attendant‘s? They’re both fiery coming-of-age novels, so it makes sense.)

why I’m excited: A novel about gun violence in the U.S. couldn’t be more topical right now, and best of all, it seems that Clement will interweave that theme with a story that’s genuinely nuanced and compelling (making it much more than just an “issue novel”). The premise also put me in mind of The Florida Project, a film about a mother and daughter struggling to make ends meet living in a motel in central Florida. That movie is streaming on Amazon Prime; I haven’t seen it yet, but it’s currently at the top of my to-watch list, and I’m hoping Gun Love will strike the same notes. 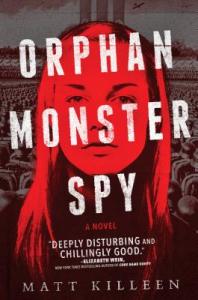 the premise: It’s 1939 Germany, and the Holocaust has just begun. Sarah, a blonde and blue-eyed Jewish girl, burns for revenge after her mother, an actress, is murdered at a checkpoint. She’s soon recruited as a spy by a mysterious man who needs her to infiltrate an elite boarding school attended by the daughters of Nazi leaders so that she can uncover the blueprints to a devastating bomb that could turn the tide of the war.

why I’m excited: It’s yet another thrilling coming-of-age novel: just take a minute or two to absorb that premise! It’s hard to imagine a more intriguing backdrop for a story that also promises to tackle tough questions of identity, revenge, and survival. It’s appalling to me that today in 2018, Nazism is on the rise all over again. Orphan Monster Spy feels like an urgent antidote to the anti-Semitic hate that has killed millions and might kill millions again if we’re not careful. I’m planning to clear my calendar for an afternoon read this in as close to one setting as I can manage–I hope it lives up to the hype I’ve built up for it in my mind.

I’m Maggie Tiede, a freelance writer who loves to read. This is where I blog about books.

Sound like your cup of tea? Then stick around and browse the stacks–I hope you’ll find something you love!