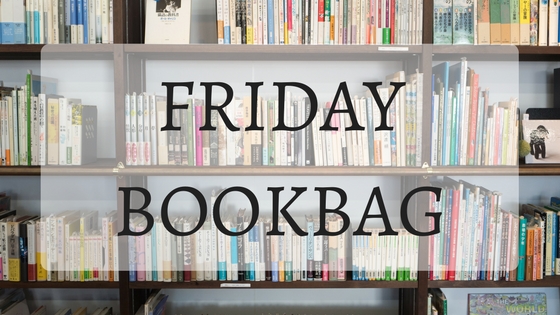 This week I’ve got a YA novel about resilience, the Civil War, and zombie slaying (a killer combo!) and a nonfiction book about ten great cultural critics in my bookbag. Let’s dive in!

the premise: In Justina Ireland’s vision of the past, the American Civil War was never won because zombies rose from the battlegrounds of Gettysburg, forcing America into an uneasy peace, united against the undead. The Negro and Native Reeducation Act forces Black and Native people–many just children–to train to protect white people from zombies, and protagonist Jane McKeene is training as an Attendant to protect the wealthy–a cushier gig than the front lines, at least. She dreams of someday returning to her Kentucky home, far from the privilege and intrigue of the East Coast…until she accidentally gets tangled up with enemies even more dangerous than the undead.

why I’m excited: Like Orphan Monster Spy in last week’s Friday Bookbag, Dread Nation: Rise Up is an explosive YA novel that tackles history and oppression from a fresh new angle. I love alternate history (even the zombie-infected kind) and I can’t wait to get lost in Ireland’s world, which seems to have a lot to say about our own world, too.

Sharp: The Women Who Made an Art of Having an Opinion by Michelle Dean

the premise: Sharp tells the story of ten cultural critics who have (according to the inside flap) “what Dean calls ‘sharpness,’ the ability to cut to the quick with precision of thought and wit.” Those women are Dorothy Parker, Rebecca West, Hannah Arendt, Mary McCarthy, Susan Sontag, Pauline Kael, Joan Didion, Nora Ephron, Renata Adler, and Janet Malcolm. In Sharp, Dean blends biography with her own cultural criticism and commentary.

why I’m excited: Dean’s chapter on Joan Didion was excerpted in Buzzfeed as “How Joan Didion Became Joan Didion,” and it was excellent, so I requested this book from the library right away. I love history, I love feminism, I love literary criticism, and I love the inside baseball of literary criticism. This book looks to have all four, which makes it a must-read for me.

I’ve been hoping to improve my cultural criticism skills (I play around with them on this blog, but I’d love to do more work with actual media outlets with editors someday), and though Sharp isn’t a how-to book, I think I could do worse than to read about the greats. Plus, Dean’s own work as a journalist and critic is really great.