Fairytales are often as repulsive as they are fascinating, and in The Merry Spinster, Daniel Mallory Ortberg dials up the intensity of both sensations up to 11. These short stories are all retellings of myth and legend (with a few Bible stories thrown in), and they’re the only retellings I’ve ever encountered that retain all the opacity, awe, and terror of the originals. Sometimes that opacity is a little much–I didn’t understand a word of one story, “Some of Us Had Been Threatening Our Friend Mr. Toad”–but usually it’s thrilling. I’m a fairytale nut and it sometimes feels like I’ve consumed every story under the sun already. Reading The Merry Spinster felt like uncovering a treasure trove of lost work from a favorite artist, something exactly in the style of the originals, but wonderfully new. Much of the praise of this book centers on Ortberg’s wit–and his wit is indeed brutally sharp–but what I liked best was his obvious understanding of what makes fairytales work. In the end, it’s not about wit, plot, or character, though those are nice–it’s about pure, raw, turbulent emotion, and luckily, The Merry Spinster has that quality in spades.

Note: This review was written before Daniel’s second name change. I have left the original text as is but please note that his name is now Daniel M. Lavery. 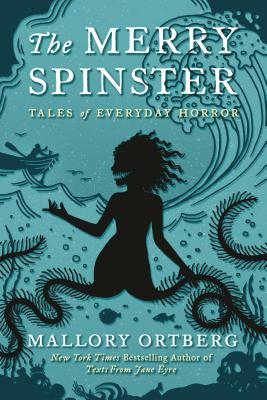 Daughters are as good a thing as any to populate a kingdom with–if you’ve got them on hand. They don’t cost much more than their own upkeep, which you’re on the hook for regardless, so it’s not a bad strategy to put them to use as quickly as possible.

I converted to Christianity just before Christmas, 2016. After years of atheism, it’s still something that feels mildly embarrassing to me, like I gave up somehow; I’ll admit that in many ways, I’m not very good at being a Christian, though at this point, God and I have reached the point of no return in our serious, if wary, relationship. (I relate strongly to this piece by Hanif Abdurraqib about why he still fasts for Ramadan despite being a less-than-fully-observant Muslim.)

I write all this because Daniel Mallory Ortberg has created something almost biblical with The Merry Spinster, not in the sense that it is remotely holy, but in the sense that it is polyphonic, inscrutable, and often terrifying. The love, loss, and vengeance in these stories is loud and in your face; it feels like it’s instructing you, though you don’t quite understand the lessons. And I mean these things in the most positive way possible.

The strongest story in the collection is the first one, “The Daughter Cells”; in this retelling of “The Little Mermaid,” the mermaid is more alien than girl. She goes to land not so much for the love of the prince but out of a bureaucratic desire to improve the efficiency of humans and a more personal one to gain the prince’s soul. In message, if not in tone, it reminded me of films and books like Annihilation and Contact; two species meet and harm each other entirely by accident. The thing is, those examples have hours and many pages to set up their premise; Ortberg achieves the same thing in a scant 25 pages. I’ve never read anything like it.

While in my opinion the collection doesn’t quite return to the heights of “The Daughter Cells” after that 25th page, most of the other stories are nearly as compelling. Ortberg does particularly interesting things with gender, playing with pronouns, names, and titles in intriguing and unsettling ways that meant a lot to me as a nonbinary person. (Ortberg has talked about how writing this book helped him come to terms with being trans.)

In particular, “The Thankless Child”–the second story in the collection and a loose retelling of “Cinderella” among other fables–provoked me to think harder and deeper. Its protagonist is named Paul, but she uses she/her pronouns. (It jarred me at first, but after all, so many “boys’ names” have been reclaimed as “girls’ names” anyway…why not Paul?) She lives in a desert hellscape where salt is currency, and her godmother is a supernatural and vengeful being who is jealous of Paul’s dead mother. Gender roles are fluid–couples fall into the “husband” and “wife” roles depending on their aptitudes, not their genders–and it fundamentally alters the Cinderella story in ways that surprised me. “Cinderella” is one of the most-retold stories imaginable (Ella Enchanted is my personal favorite retelling), yet Ortberg still manages to make it fresh.

Other stories are straight-up terrifying rather than just unsettling. “The Rabbit,” a sinister retelling of “The Velveteen Rabbit,” particularly upset me (in a delicious way). Another story, “Some of Us Had Been Threatening Our Friend Mr. Toad,” is just as creepy, but much less effective because it’s so confusing. (Ortberg has a loopy prose style that usually works well but sometimes seems to waffle and double back on itself.)

Every story in the collection feels like a major risk, and some don’t pay off as well as others. I really didn’t like the “Mr. Toad” story, and others, like “The Wedding Party”–about a couple arguing before their courthouse wedding–were interesting but not emotionally effective for me.

The word that pops up again and again when I think about The Merry Spinster is “unique,” and not in a passive-aggressive Midwestern way–it’s genuinely unique and thoughtful and experimental and wonderful. It scratched an itch I never knew I had, and now that it’s been scratched, I’m sad that there aren’t more books in this niche. Ortberg’s next book will be a memoir (currently titled Something That May Shock and Discredit You) but I hope he returns to this well soon. ★★★★☆

My copy of The Merry Spinster came from my local library and I was in no way compensated for this review.

I’m Maggie Tiede, a writer who loves to read. Here, I blog about reading, writing, and anything else that’s on my mind.

As of June 2021, I am once again open to review requests. Check out my review policy.