Invitation to a Bonfire is a slow-burning reimagining of Vladimir Nabokov’s marriage, told mostly through the eyes of the fictional Zoya, a boarding school employee who falls in love first with “Lev Orlov’s” (the Nabokov insert’s) books and then with the man himself. Over the course of the 1930s, she finds herself in a vicious–and murderous–love triangle with him and his wife. It’s an extraordinary premise that unfortunately feels sordid in execution. The novel careens from a slow first half, beginning in Zoya’s childhood in the Soviet Union and inching through her time as a scholarship student and greenhouse employee, to a breakneck (and murderous) second half that goes off not so much with a blaze as an incomprehensible flash-bang that left me frustrated and dazed. The novel is full of keen observations (especially about life as a Soviet immigrant to America) and razor-sharp turns of phrase, but as a story, I found it extraordinarily unsatisfying. 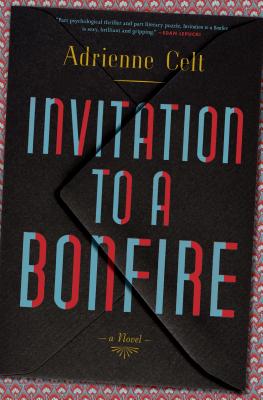 Invitation to a Bonfire by Adrienne Celt

No one minded theft or inconsistency, even vitriol, so long as it meant you were making a statement. This was my first great lesson in being American, and I took it to heart.

—Invitation to a Bonfire

I’m struck by how much I find my gut creeping into my feelings about books, no matter how hard I try to get my reviewing down to a science. I like this because X, I don’t like this because Y, I’ll tell myself smugly when I’m not reading. The problem is that as soon as I start reading, those lofty theories fly out the window. It’s all about me and the book, and sometimes we hit it off, and sometimes we don’t.

I did not hit it off with Invitation to a Bonfire, and while I have a few inklings as to why, the intensity of my dislike surprises me.

Invitation to a Bonfire follows a young Soviet American woman named Zoya who falls in love with Soviet author Leo Orlov, a stand-in for Vladimir Nabokov. Zoya also falls into a standoff with his calculating wife, Vera, based on Nabokov’s actual wife, Véra. It’s framed as a collection of found papers including journals and love letters, a device that I think works not at all, and it’s about as slow of a slow burn as you’re likely to find in literary fiction.

I enjoyed this book most when Adrienne Celt was writing about Zoya’s experience as the daughter of a Red revolutionary-turned-traitor. The Soviet Union holds such a cartoonishly evil and exaggerated place in American culture that the subtlety Celt brought to its politics was refreshing and welcome. The problem is that as soon as Celt turns to the setting of an exclusive boarding school in 1930s America, where Zoya is sent as a scholarship student and where she works after graduation, the tension pops like a balloon and never comes back.

I hammer on this point to the degree that family and friends roll their eyes when they hear me say it, but historical fiction is never really about the past–it’s about the present, and over and over I found myself frustrated with how little Invitation to a Bonfire seems to be about the past or the present. The supposed “historical” documents Celt uses (including oral histories) feel not at all like something written in the 1930s. The boarding school is about as clichéd and cardboard a boarding school setting as it gets; it could have been set in the ’80s or ’90s instead and I wouldn’t have noticed. There’s so little genuine American historical detail–though the Soviet stuff is well done–that it left me unmoored and uncaring about anything that happened.

The novel seems uncertain if it’s expecting you to know about Vladimir Nabokov’s marriage or not. I’ve never read Lolita or anything else of his work, so I went into this novel pretty cold except for a brief scan of his Wikipedia page. As far as I can tell, Celt has based the novel very loosely on actually events, dropping in wink-wink-nudge-nudge Easter eggs: Felice is the novel’s version of Lolita; in Orlov’s love letters, he refers to names as having colors, and Nabokov himself was a renowned synesthete. The problem is that they felt to me like the literary version of after-credits scenes in Marvel movies: cool bonuses, but utterly unnecessary. In a novel that’s already agonizingly slow, that Celt chooses to devote so much energy to establishing her almost-Nabokov is frustrating.

Celt also spends a lot of time establishing Vera’s background as upper-crust and Zoya’s as a half-step above peasantry; class is a crux of the novel even after Zoya comes to America, a poor student at an overwhelmingly rich school. But in real life, Véra was Russian Jewish and faced overwhelming anti-Semitism that very much shaped her life and Nabokov’s. It’s not so much that I think Celt has an obligation to include every real-world detail–as I said, Invitation to a Bonfire is an extremely loose adaptation–as that I think it’s odd she includes so much peripheral detail about Nabokov and so little about Véra. The imagination of the novel feels lumpy, coming in clumps when I don’t want it there, yet feeling oddly barren when it would be most useful.

I could have forgiven most if not all of that if the core murder mystery were more effective, but it’s not. About halfway through, the novel goes from extremely predictable to off-the-walls nuts. I could see Celt’s motions behind the curtain so clearly that it made me roll my eyes. Zoya and Lev’s love story is as flimsy as tissue paper; there are plot holes so big you could drive a tank through them. I had to read over the final couple of pages several times just to understand what I was reading because it was such a polar flip from what the first half seemed to be leading up to.

I don’t like being made to feel stupid while reading a novel, and Invitation to a Bonfire made me feel somehow simultaneously stupid and overly smart. There’s so much here that I wanted to love: a fascinating history, a fiery love story, crimes of passion. Celt’s prose is perfectly serviceable and sometimes even stunningly beautiful. The DNA is all there. So why didn’t it come together for me?

I think I can place the fatal flaw in the novel, but it might really be in me as a reader, and I hate that. I hate writing negative reviews because they remind me of the subjectivity and mundanity of my own opinions more than anything else, though they’re not fundamentally different than my positive ones: expressions of how a particular book struck me at a particular time, expressions that are affected by a smorgasbord of things that are not actually the book or the author’s fault.

No matter the root cause, for me, Invitation to a Bonfire fizzles instead of blazes. What a shame. ★★☆☆☆

My copy of Invitation to a Bonfire came from my local library and I was in no way compensated for this review.

2 thoughts on “Book Review: INVITATION TO A BONFIRE by Adrienne Celt”