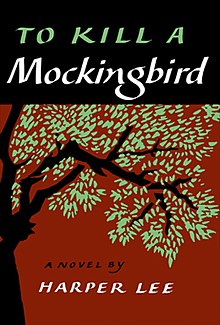 PBS recently undertook a weeks-long process involving polls and interviews to try and discover the top 100 most-loved books in America, a project they called “The Great American Read.” Now the results are in, with To Kill a Mockingbird by Harper Lee occupying the top spot.

I find this project so fascinating because it’s not out to find the “best” book, per se–and I’m not convinced there is such a thing, anyway–but rather to find which books have been most well-loved and influential in Americans’ lives.

Finally, I was delighted to see the volume of sci-fi and fantasy novels on the list. I wasn’t surprised to see 1984 or the Lord of the Rings trilogy (#5), but I was surprised that the Outlander series (#2!!! wow), Game of Thrones (#48), and Ready Player One (#76) were all so well-loved. Further proof that despite these genres’ reputation as niche, fringe, geeky, and weird, they are in fact extremely popular and influential.

It was especially interesting to digest these results after writing yesterday’s rant about “canon” and why I think it’s silly to think of certain books as universal. I was struck by how few books I’ve read on this list, not just the ones by men (which was my main point yesterday) but also the ones by women: I think I’ve read maybe 25% of this list, and that’s being generous. I’ve never even read To Kill a Mockingbird.

I don’t necessarily see that as a bad thing. Again, I’d much prefer to read to my own interests (life is short) and there are a great deal of books on that list that don’t look appealing to me. But it was interesting.

I would also love to see a Venn diagram of sorts about who voted for what. Could we cross-reference how many people voted for Atlas Shrugged (#20) and also, say, Their Eyes Were Watching God (#51) or The Notebook (#56)? I’m always interested in the range of people’s tastes and this seems like a treasure trove of data in that regard.

A big thank you to pop culture writer and podcaster Linda Holmes, whose tweets this morning brought this list to my attention.

So, what do you think about these results? Did some surprise you or even shock you? Did some make you roll your eyes? (As much as I try to reserve judgment about others’ tastes, there were definitely a few of those for me.) Did others delight you?

I want to hear about it, so please leave your thoughts in the comments.