It’s been awhile! Since, uh, November, in fact. This is unfortunately the longest hiatus I’ve ever had on Maggie Reads, and if you follow me on Twitter, you might have gleaned that it’s for health reasons…again. Oy vey.

The bad news is that I’m not up to writing or reading much more than 280 character snippets at the moment. The good news is that I’m getting surgery in February that should help a lot. It’s going to be a long road back to normal, but I’m hopeful that normal is, indeed, waiting for me somewhere in 2019. I hope you’ll stick around till I get there!

How cool is that? It’s not even one of those weird stub articles that’s written by someone with an axe to grind. It’s a very professional-looking, well-rounded Wikipedia article. I’m honored to be included, though who knows if I’ll last till the next edit.

In other news, I celebrated a lovely Christmas with family and got to both give and receive some fantastic books. My wishlist this year was pretty much entirely cookbooks and my loved ones gave me some terrific ones. Salt Fat Acid Heat by Samin Nosrat, The Sioux Chef’s Indigenous Kitchen by Sean Sherman and Beth Dooley, Now and Again: Go-To Recipes, Inspired Menus + Endless Ideas for Reinventing Leftovers by Julia Turshen, and an Instant Pot cookbook were all on the menu. I can’t wait to give them a spin. (Especially Salt Fat Acid Heat–like everyone else, I adored Samin’s Netflix series.)

My cousin also gifted me The Wasp Factory by Iain Banks and There There by Tommy Orange. I’m excited about both but especially about There There since I had it on hold at the library last month but was unable to pick it up because I’ve been so sick. I was crushed to miss it because it’s literally a 4-to-6-month-long wait for it in my local library system! That’s a loooooong time when you’re excited about a book, but now I don’t have to go back to the back of the line (or be back in line at all). Great timing, cuz.

As I said, I also gave a bunch of books for Christmas, with the help of NPR’s 2018 book concierge, which gets better and better every year. (It’s a giant widget of book recommendations that you can filter by all sorts of criteria.)

Here are some of the books I gifted this year:

Bad Blood: Secrets and Lies in a Silicon Valley Startup by John Carreyrou, for my dad: A book about Theranos, a disastrous startup that lied to lots of people about their blood test results and was generally a terrifying/wacky/out-of-control company. The book is written by the journalist who initially broke the story for the Wall Street Journal.

Emergency Contact by Mary H.K. Choi, for my brother who just left for college: A college romance (it’s a YA novel) that takes place mostly through text messages. My brother’s gay and unfortunately this romance is m/f but he loves the premise and promises to forgive me. (LOL.)

Orphan Monster Spy by Matt Killeen and Warcross by Marie Lu, for my high school-aged brother: These are the only two books that I read before deciding to gift them. They are two badass YA novels that, to me, showed how rich and diverse the YA category is becoming. OMS is about a Jewish teen undercover at a Nazi boarding school and Warcross is about a teen hacker who hacks a futuristic Fortnite/World of Warcraft-style video game. Both totally awesome and (I hope) right up my brother’s alley.

Dactyl Hill Squad by Daniel José Older, for my middle school-aged brother: This one’s about a group of orphans banding together and fighting bad guys during the Civil War, except they all have dinosaurs. How cool is that?!?!?! It also has the coolest cover ever: 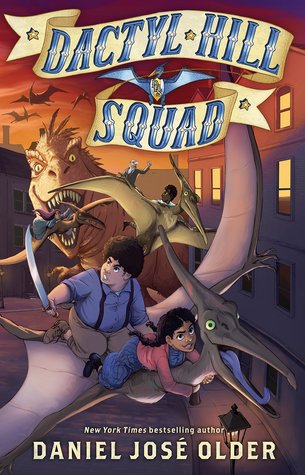 Best. Cover. Ever. Right? I hope my brother thinks so too!

So, those are all my bookish updates. I hope you’re all having a peaceful end of the year, and if you’re not, I hope you at least have some good books to get you through. I’m not sure when I’ll be back on the blog, but I’ll definitely be back. See you soon!

(And if you’re so inclined, please continue to cite me on Wikipedia, okay? It’s very flattering!)

3 thoughts on “I’m a Wikipedia source now, apparently! (And other miscellany.)”

I’m Maggie Tiede, a writer who loves to read. Here, I blog about reading, writing, and anything else that’s on my mind.

As of June 2021, I am once again open to review requests. Check out my review policy.