The Gospel of Trees is an ambitious memoir: it’s both a personal reckoning and a much bigger historical one; it’s a microcosm of one missionary family and also a macrocosm of the tangled legacy of missionary work around the globe. In it, Apricot Irving recounts her personal experience growing up as a missionary’s daughter in Haiti–Ayiti Cherie–while weaving in meticulous and nuanced research about the island’s brutal colonial history. It’s a little too long and its structure comes somewhat unglued by the end, but it’s still a top-notch memoir by a gifted writer that will reverberate with me for a long time.

The Gospel of Trees by Apricot Irving

When we don’t know what to make of a situation, we grope for a familiar pattern, a path worn into the grass. The danger, of course, is that by imposing our own expectations, we fail to see anything clearly. I am as guilty of this as anyone.

Stories, like archaeology, are fragmentary, composed of scraps and nuances, and–depending on what is left out–most narratives can be constructed so as to end in either glory or ruin. But the missionaries I had grown up with were neither marauders nor saints; Haiti was neither savage nor noble. The truth was far more complicated.

—The Gospel of Trees, page 1

Publishing is full of books by white people who write about how they saved the “Third World” or how the “Third World” saved them. Luckily, The Gospel of Trees feels like a sort of antidote to this disrespect and tackiness: written by a white woman who was once a missionary’s daughter in Haiti, it somehow turns these tropes upside-down and inside-out, transforming them from cardboard cut-outs into something rich and new.

Apricot Irving is the daughter of white farmers who picked up everything and moved to northern Haiti as missionaries in the 1980s; Irving and her sisters went with them. At first the girls were enchanted by the beauty and opportunities of their corner of the island–especially the paradoxical and uncomfortable luxury they enjoyed as blan outsiders, a sharp contrast to their austere lives in the States–but paradise soon crumbles beneath their father’s single-minded desires and anger and their mother’s growing exhaustion.

Irving draws on a wide array of material to build the narrative: her own diaries, those of her parents, the ever-optimistic and fundraising-oriented missionary bulletins sent back to American churches, field research, historical documents, and personal letters; the facts never feel mushy or in doubt.

She is also impressively introspective throughout: she writes about some of her most unflattering thoughts and actions with a thoughtful openness I can’t even imagine possessing. It allows her to tackle enormous questions of race, wealth, religion, power, privilege, misogyny, and more without it coming across as yet another guilty white person looking for absolution. It’s clear that she’s either found absolution within herself or has given up on finding it, so there is–refreshingly–not a drop of neediness left on the page.

It’s all tremendously effective right up until the latter third, which sees Irving first leaving Haiti as a teenager and then returns again and again as an adult. The tight structure of the first two parts is replaced by a confusing coming-apart that muddies things; all the powerful contradictions and ironies from earlier pages seem to fizzle out as Irving doubles back and forth and back again.

The Gospel of Trees is neither bitter nor sweet; it’s not even merely bittersweet. It contains a whole and dazzling palette. It haunted me as I read it and it will continue to haunt me long after I’ve set it down. ★★★★☆

My copy of The Gospel of Trees came from my local library and I was in no way compensated for this review.

This week my bookbag is packed with all sorts of goodies: a mind-bending short story collection, a midcentury mystery, a “dystopian” literary novel with a twist, and a memoir of the complicated legacy of missionary work in Haiti. Let’s dive in!

All the Names They Used for God by Anjali Sachdeva 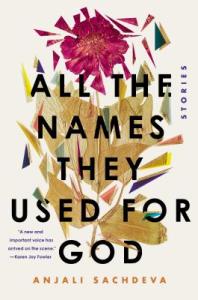 the premise: This collection of nine short stories spans centuries and genres is “united by each character’s struggle with fate,” according to the inside flap. The stories also explore science, religion, and the overlap between them, with settings ranging from Andrew Carnegie’s fiery steel mills to the Old West to futuristic genetic labs. At least, I think that’s the premise–short story collections are very hard to summarize before I’ve read them, so I hope I’m doing this one justice.

why I’m excited: This book’s cover is sublime, and I’m not too proud to admit that that’s what drew me in first. Second was the fact that short story collections are a delight to read; I love getting the chance to catch my breath between each story in a way that can’t happen between chapters in novels. Third, Anjali Sachdeva is playing with the boundaries of literary fiction and sci-fi in ways I find delightful. This is right up my alley.

the premise: In the summer of 1965, the two children of Ruth Malone–a single mother and cocktail waitress–go missing. Malone herself is immediately suspect, her fashionable clothing and makeup, taste for booze, and interest in men making her a target of gossip in her tight-knit Queens, New York community. As the investigation and trial unfold, journalist Pete Wonicke is assigned to cover the case, and he finds himself increasingly entangled in Ruth’s mysterious web: is she a heartless murderer or an unlucky victim of misogyny and the rumor mill? The answer might lie in between…

why I’m excited: I eat up Midcentury stuff with a spoon (Mad Men is hugely flawed but one of my favorite shows for this reason), so a murder mystery set in 1965 New York? That’s a slam dunk for me. I also love books about journalists (check) and ones that dive deep into misogyny and the toxic and contradictory expectations we place on mothers (check). I can’t wait to get lost in this book.

the premise: Peggy Hillcoat is kidnapped and taken to the middle of nowhere by her ultra-survivalist father when she is eight years old. He lies to her and tells her that the rest of the world has been destroyed, and the two share a harsh, isolated life in rural Britain for years before Peggy stumbles upon a pair of boots that lead her back to civilization, her mother, and a secret that threatens to tear her apart.

why I’m excited: I was trying to figure out why this title sounded so familiar when I realized that Our Endless Numbered Days is also the title of an Iron & Wine album. It’s the perfect title for this story, which puts a great twist on typical apocalypse stories. I grew up homeschooled on an extremely isolated and dysfunctional farm in rural Minnesota; like History of Wolves rang true for me back in October, I think this book is going to feel heartbreakingly personal, so I’ll keep a box of tissues handy when I read it.

The Gospel of Trees by Apricot Irving

the premise: Apricot Irving grew up in Haiti as the daughter of an environmentalist missionary determined to reforest the country’s devastated hillsides. In The Gospel of Trees, Irving reckons with that past, writing about the bitter legacy of colonization and the unintended consequences of trying to “save” a country you barely understand.

why I’m excited: Missionary work fascinates me because it’s so contradictory. It’s a supposedly altruistic act that often has terrible consequences. It’s rife with painful family drama (The Poisonwood Bible, anyone?) even though it’s all about bringing more people into a Christian fold that idealizes family. And its racial and colonial dynamics are particularly traumatic and messy. I’m excited to read this book, both because Irving has led an interesting life and I think it will be interesting to read about, and also because I hope it will help me sort out my own complicated feelings on this subject.