This week in my bookbag I have a novel with an unusual vision of the end of the human race, a coming-to-New-York story with a delicious twist, and an angsty Soviet American love triangle that promises to set me on fire. Let’s dive in!

Future Home of the Living God by Louise Erdrich 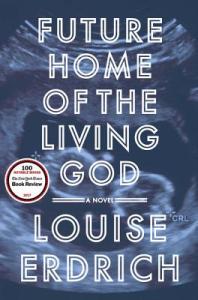 the premise: Evolution has started moving backwards, with women across the world giving birth to what appear to be early versions of humans–and Cedar Hawk Songmaker is pregnant. Caught between a well-meaning adoptive family and her Ojibwe birth family, Cedar desperately tries to keep her pregnancy a secret as martial law descends on the world and pregnant women are registered and interned in a desperate attempt to move evolution forward once more.

why I’m excited: I love when literary authors like Louise Erdrich jump the fence to genre (and vice versa, as you could argue Jeff VanderMeer did with Annihilation). Future Home of the Living God plays in the same sandbox as other sudden evolution/sudden infertility classics like Children of Men and Darwin’s Radio, but where those books are stolid and grim, I’m hoping Erdrich will bring a touch of sly humor to the proceedings. After all, the apocalypse means something different to Indigenous folks who have already seen the end of one kind of world. Plus, that cover is gorgeous. Using an ultrasound image as the background was a stroke of genius.

the premise: From the post I wrote yesterday about this book, restaurants, and other underutilized settings in literary fiction:

“Sweetbitter follows a woman who moves alone from a small town to New York City, where she lands a job at a landmark restaurant as a backwaiter. She falls into a dizzying love triangle with Simone and Jake, two otherworldly-beautiful folks with secrets to keep, and tries to survive New York’s punishing restaurant scene.”

why I’m excited: Well, I’m already halfway through this one, so it seems a tad like cheating to say what I’m excited about now. The reason I jumped this book to the front of my TBR queue was because I wanted a sensual, melodramatic bildungsroman in my life, and boy, does this book fit the bill. It won’t be everyone’s cup of tea, but it’s soapy and funny and loud and sad and beautiful. I’m loving it. It’ll make you hungry, too.

Invitation to a Bonfire by Adrienne Celt

the premise: Zoya Andropova, a Soviet refugee who feels lost and isolated at a New Jersey boarding school, gets swept into a whirlwind affair with Russian author Leo Orlov, only to discover that it’s really a love triangle–his wife Vera lurks ever behind the scenes. As the affair grows more heated and more sinister, Zoya tries to disentangle the heady threads of national and ethnic identity, class lines, and, er…great sex, it would seem.

why I’m excited: Man, I don’t know! This could go either way, from being icky and terrible to being beyond great. Adrienne Celt based the story on the complicated marriage of Vladimir Nabokov, which I freely admit I know nothing about. I’m getting a little bit of a Sweetbitter vibe in that Invitation to a Bonfire seems to be a sensual coming-of-age story. I also love reading refugee stories, and though Soviet refugees constitute one of the biggest chunks of the American refugee population, they don’t seem to get their due in fiction. I’m ready to give myself over to this Soviet-angst-love-triangle drama, whether it lives up to my high expectations or not.