As with most clichés, the truth is somewhere in between. I try not to let a bad cover put me off an otherwise good book, especially since writers don’t usually have a say in their design. But it’s also true that a spectacular cover will embed a book in my mind, making me more likely to seek it out and less likely to forget it when I’m done.

2018 has been a year of spectacular covers in publishing, with more beautiful books than I could possibly hope to read in 9 or so months. That’s why I’ve narrowed my list down to my 5 favorite covers of books I’ve read this year so far. Let’s dig in!

An American Marriage by Tayari Jones

A flat image on a computer screen doesn’t do this cover justice–in person, it’s a glittering metallic–just like a book review can’t possibly do the novel justice. An American Marriage follows a Black couple, their relationship tumultuous but also passionate and strong, who are separated when the husband, Roy, is falsely accused and imprisoned for rape for years. His wife, Celestial, tries to pick up the pieces, and falls in love with her childhood friend, Andre. It’s a novel so star-crossed that it hurts to read, but it’s also vibrantly hopeful, full of vivid romantic and sensory detail that transported me completely into Roy, Celestial, and Andre’s world.

The cover design is simple but intriguing. The golden tree is beautiful, but the metallic finish makes it look a little like prison bars. Family is a major theme of the novel, so a tree on the cover is especially appropriate; its branches soar but there are no roots to speak of. The font, also, strikes me as looking a little bit like something you’d see in colonial America: perfect for a novel that speaks to the legacy of American slavery. All in all, that simple image belies a deeper meaning–just like the novel suggests that simple narratives aren’t always as they seem.

The Mars Room by Rachel Kushner

The woman on the cover of The Mars Room looks vulnerable and ready to fight, diminutive but with an outsize attitude. The Mars Room is a vicious, blistering book about a woman named Romy Hall who’s incarcerated for life for killing her stalker. It’s morally complex but also simple at the same time: it posits that Romy is neither good or bad, but shades of grey; it also seems to posit that no one, even if they were bad, deserves the brutal dehumanization of prison.

The cover is as dark, gritty, and somehow alight as the Tenderloin district of San Francisco (where much of the novel is set). It’s grim but captivating. You know the woman in that photograph won’t take any shit, except, of course, for the mountains of shit that have already been shoveled her way. Both cover and novel are unforgettable.

Convenience Store Woman is a charming short novel (almost novella-length) about Keiko Furukura, a woman in her 30s who devotes her entire life and self to working in a convenience store. Her friends and family are baffled as to why she chooses not to get married or get a “real” job, but for Keiko, the convenience store is all she needs. The novel is frank and observant, equal parts achingly sad and laugh-out-loud. It’s one of the best portrayals of an autistic character I’ve ever read. It’s sweet with sharp edges, never cloying or infantilizing.

I don’t have many deep things to say about this cover except that it’s completely adorable. The exquisite design of something as simple and ordinary as a rice  ball (a.k.a onigiri) seems to promise that the story within will be just as surprisingly lovely, and author Sayaka Murata delivers wholeheartedly. 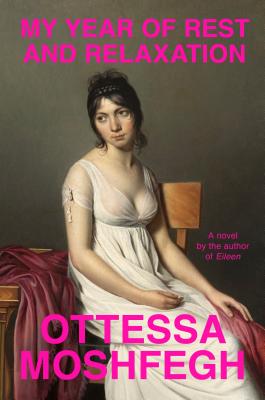 My Year of Rest and Relaxation by Ottessa Moshfegh

Sometimes less is more. That’s both the philosophy of this cover and of My Year of Rest and Relaxation‘s unnamed heroine, who decides to drug herself to sleep for an entire year in her New York apartment in 2000. She’s disenchanted and rich and working with a psychiatrist so unbelievably unethical that it made me cringe; she doesn’t care about anything, which means, somehow, that she cares about everything. It’s a difficult book to read. For all its flat affect, it’s also extremely beautiful and emotional.

My Year of Rest and Relaxation is historical fiction set in a very recent past–the held-breath-that-no-one-knew-they-were-holding before September 11th, 2001 in New York City–which makes its cover design all the more clever. The painting is clearly historical, but the woman’s sardonic facial expression and the bold, hot-pink font speak of more recent times. The novel’s protagonist is described as a waif-like blonde, but I couldn’t help picturing her like the cover. The image gets its hooks in your mind and stays there, just like the story does. 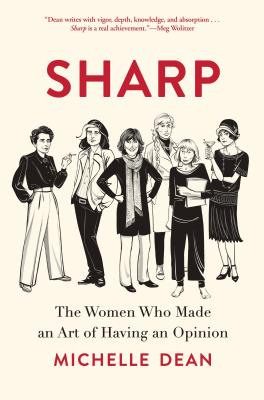 Sharp: The Women Who Made an Art of Having an Opinion by Michelle Dean

In the nonfiction book Sharp, Michelle Dean documents the interlinking histories of “sharp” (i.e. brilliant, insightful, and sometimes caustic) women writers of the 20th century, including Joan Didion, Susan Sontag, and Dorothy Parker. It’s a book that feels both academic and dishy: it’s well-researched and -written enough for it to feel “classy,” but brings its claws out enough to be terrific fun to read. It makes you feel like you know the women Dean is writing about.

That’s why I think its cover is especially perfect. The illustrations are charming, done in their own distinctive style, but each woman is fully recognizable as herself. It encapsulates the work Dean has done to create a through-line between these talented and influential writers, and it certainly catches your eye on the shelf.

Did I include any of your favorites? What covers have made you swoon in 2018? I want to hear about them. Leave them in the comments (and feel free to link to your own blog posts!).