There’s a great piece over at LitHub today by Katherine Cusumano that asks an interesting question: “Why are so many fictional teens entering cults?” They list a bunch of novels on my already-read and TBR lists as examples of the trend, including The Girls by Emma Cline, The Ash Family by Molly Dektar, The Shades by Evgenia Citkowitz, and The Incendiaries by R.O. Kwon.

I’m such a fan of the cult novel (er, novel-about-cult?) trend that for awhile I listed it specifically as something I was looking for on my Netgalley profile.

Part of that is personal: while I didn’t grow up in a cult, I did grow up homeschooled in rural Minnesota, and several of the homeschooled families my family crossed paths with were in actual cults and communes. My family definitely had some cult-like conspiracy theory beliefs, too, like sovereign citizenship and anti-vaxx, and we bounced between conservative Christian-adjacent spirituality and Wicca for most of my teens.

Reading novels about cults is a way for me to process my complicated feelings about the way I grew up. I don’t think I’m alone in that–in fact, I wonder if we’re seeing a new rise in cults and conspiracies like what famously occurred in the 1960s and 1970s, because as I’ve gotten older and met more people, I’ve learned that the isolated, fearful way I grew up is far from unique among other 20-somethings.

But cult novels get at something more universal, too, as Cusumano breaks down:

Cults, and the forces at play within them, are not new—but their presence in these books reflects a desire to engage with an increasingly polarized sociopolitical landscape. These stories hold a disquieting mirror up to gendered discrimination, and violence, that exists in other arenas, and they put pressure on the ways in which the most extreme cultish tendencies—the absolute faith in a singular leader, the subjugation of women, the stoking fear of alternate perspectives—exist well beyond cults themselves.

–Katherine Cusumano, “Why Are There So Many Fictional Teens Entering Cults?“

All fiction is a funhouse mirror compared to reality. Reality, after all, doesn’t care much about catharsis or narrative (although we may may find personal catharsis and narrative in hindsight). Cults are the funhouse-iest funhouse mirrors of all. Personal and political dynamics are turned topsy turvy (or helter skelter), giving authors a bigger, messier, more symbolically-laden sandbox to play in.

I love cult novels, and I’m guessing many of you do, too. That’s why I’ve assembled a list of some of my favorites below:

History of Wolves by Emily Fridlund

One of my most-recommended books on this blog (and the first one I ever reviewed), History of Wolves follows teenage Linda, who grows up in the remains of a commune in northern Minnesota with two adults she’s not even sure are her parents. She soon becomes entangled with her new neighbors across the lake, stirring up intense questions about faith, family, and what kind of love and care we owe one another.

History of Wolves is especially interesting to me because it blends different kinds of cults (and explores the line at which a cult becomes a religion–more about that when I talk about The 19th Wife.) Linda’s family’s failed commune-cum-cult is contrasted with their neighbors’ Christian Science beliefs. This book inspired me to read Caroline Fraser’s excellent nonfiction book about Christian Science, God’s Perfect Child: Living and Dying in the Christian Science Church. Fraser grew up in Christian Science and is now intensely critical of the church’s policy towards medical care for children (namely, that they shouldn’t receive any Western medicine, only prayer healing).

This book’s out-of-sequence storytelling and bitter, idiosyncratic tone (it bounces between Linda’s unhappy childhood and maybe-even-more-unhappy adulthood) won’t be for everyone, but History of Wolves is one of my favorite books about how isolation and indoctrination affects children and teens.

The 19th Wife by David Ebershoff

I’ve read The 19th Wife several times. Each time I’ve given away my copy afterwards, convinced I’ll never come back to it–it’s a dense, ambitious novel that can be a bit of a slog at times–but over and over again it’s pulled me back. The 19th Wife takes its title from Ann Eliza Young, the 19th wife of Mormon leader Brigham Young. It’s both a historical novel about Ann Eliza and the early days of Mormonism and a modern day murder mystery about a fictional fundamentalist spinoff of Mormonism that never got rid of its polygamous practices.

Even more so than History of Wolves, The 19th Wife is about the blurred lines between cults and religions. From the description, you might expect it to be a hit piece on Mormonism, but it’s not–there are modern Mormon characters who reflect the ways Mormon beliefs have grown and changed in the 21st century. It’s much more about the harm charismatic leaders can do to their true believers, and about the ways sexism and homophobia can poison faith.

The 19th Wife is interesting from a writer’s craft perspective, too. The sheer volume of fictional and partially fictional historical documents that Ebershoff created for this book is astounding. (There’s a long author’s note at the end where he teases out some of the fact from the fiction.) I think the character development is a little flat and the plot a little too thick, but The 19th Wife, to me, is everything a good cult book should be: namely, as much about our fascination with cults, and the way normal life reflects cult life, as about the fictional cult itself. 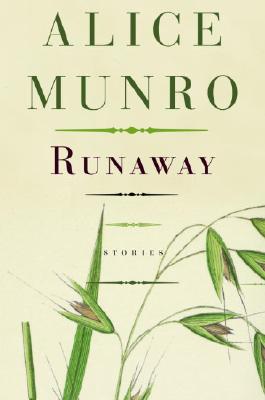 This one feels a little like cheating, since Runaway is a short story collection and only one story deals explicitly with cults. Runaway contains a trio of linked short stories about a woman named Juliet, who starts as a teacher on a cross-country train trip and ends as a woman torn apart by her daughter’s decision to cut her out of her life. Her daughter joins a cult for reasons Juliet cannot (or chooses not to) understand. Juliet blames the cult for their estrangement, but the more complicated truth creeps in around the edges of the story.

The reason I think the Juliet stories in Runaway are such a great addition to cult fiction (fiction-about-cults?) is that it’s one of the few I can think of that stays entirely on the outside of cults. There’s a quick peek in as Juliet tries to track down her daughter, but she’s kept firmly (blandly) on the outside.

It’s also one of the few stories about cults that I’ve read that doesn’t tangle with the belief/religion threads at all. It’s about the ways cults can be legitimate tools to leave painful memories behind, and about how hard it is to acknowledge that when we hurt people, they have the right to leave us behind.

We are all on the outside of something, or someone. Cults just make it visible, like cold air or a mirror makes the vapor of our breath suddenly appear.

What are your thoughts on the rise of fiction-about-cults? What favorite titles of yours should I be checking out? As always, leave ’em in the comments!