In Warcross, troubled teenage hacker and bounty hunter Emika Chen steals a power-up from a Warcross tournament, Warcross being the virtual reality sensation that’s taken over Marie Lu’s fictional vision of the future. Instead of getting arrested, Emika gets invited to Tokyo to help Hideo Tanaka, Warcross’s mysterious and handsome inventor, catch a dangerous hacker named Zero. What follows is an absolutely dazzling sci-fi adventure novel that’s both rollicking fun and a thoughtful exploration of the ever-increasing role tech plays in our lives. I recommend it wholeheartedly. 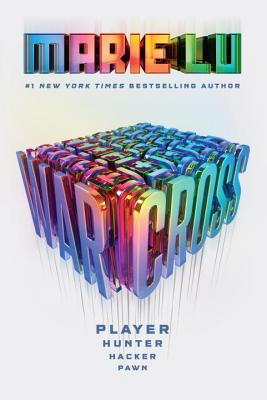 Some people still say that Warcross is just a stupid game. Others say it’s a revolution. But for me and millions of others, it’s the only foolproof way to forget our troubles. I lost my bounty, my landlord is going to come screaming for his money again tomorrow morning, I’m going to drag myself to my waitressing job, and I’m going to be homeless in a couple of days, with nowhere to go…but tonight I can join in with everyone else, put on my glasses, and watch magic happen.

The line between “young adult” and “adult” seems to blur more and more every year in publishing, and if you need hard evidence that that’s a good thing, you need look no further than Warcross.

Warcross‘s premise manages to be straightforward and thought-provoking all at once: an impoverished New York City bounty hunter, Emika Chen, commits a crime by hacking a Warcross tournament and is then plunged into a world of immense wealth and intrigue when she goes undercover in the tournament herself to uncover the identity of a dangerous hacker. It’s not hard to follow the action, which frees you up to think even more deeply about a world where our economy and our free time are completely controlled by a video game. (That world certainly doesn’t feel very far away.)

Author Marie Lu worked as a video game designer before her turn as a successful YA sci-fi author. That means that she intimately grasps the incredible rewards of gaming. This is definitely a “fist pump” novel: one where the action, both in game and out, leaves you as breathless as a superhero movie might.

That also means her critiques of tech can go way deeper than knee-jerk, dime-a-dozen “the future = bad” takes on virtual reality. In Lu’s future, Warcross is empowering as well as dangerous: underdogs from around the world become overnight superstars who can provide for themselves and their families. Lu’s characters feel effortlessly diverse to the reader, but you can still sense how much thought she’s put into it: How might international stars react similarly or differently to online superstardom? (I loved how many countries were represented, from Kenya to Germany and far beyond.) How might a gamer who uses a wheelchair in the real world adapt to an able-bodied avatar in-game? How would translation work across languages?

I could list dozens of other questions the novel raises, and it makes the whole experience far richer and more immersive than a skin-deep, U.S.-centric novel with a similar premise would be.

Warcross‘s protagonists, Emika and Hideo, are on the older side for YA: Emika is 18 and Hideo is 21. This is where the blurring between young adult and adult comes in: this novel is perfectly appropriate for even young teens (there’s no intense violence or sexuality) but was still completely engrossing for me, a 23-year-old adult. This would be a perfect book for parent or mentors to share with tech-savvy teens: it will lead to great conversations about safety online and be super-fun, to boot. There’s such a dearth of books starring 18-to-25-year-olds out there (it’s like fictional characters just…stop living their lives between 17-30) that I would have been happy to find Warcross regardless, so it’s a nice bonus that it’s so clever and well-crafted, as well.

In Warcross, Lu writes with a light touch, equally comfortable with vivid action, painful emotion, butterflies-in-the-stomach flirtation, and thoughtful observation. Her rich imagination fairly leaps off the page, and her characters are distinctly and lovingly drawn. (There’s a huge ensemble supporting cast in this novel, but I had no problem telling them apart.) She’s preternaturally gifted, and Warcross is a treat.

Perhaps this novel’s only downside is its cliffhanger ending. Thankfully, it manages to feel genuinely open rather than exploitative, but the wait for the second book, Wildcard–coming September 18th, 2018–is killing me. In the meantime, I’m tempted to flip back to page 1 and lose myself in Warcross all over again. ★★★★★

My copy of Warcross came from my local library and I was in no way compensated for this review. 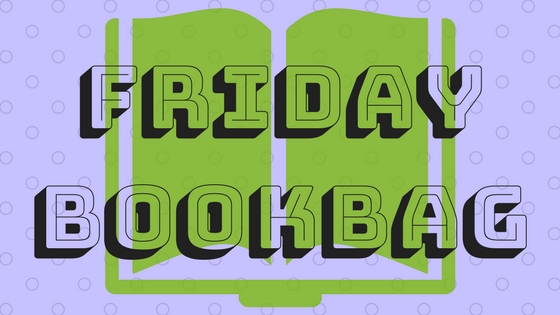 This week in my bookbag, I’ve got a sober meditation on climate change, a literary take on Korea’s Gwangju Uprising from the author of The Vegetarian, a futuristic video game-themed YA adventure, and more. Let’s dive in!

Rising: Dispatches From the New American Shore by Elizabeth A. Rush 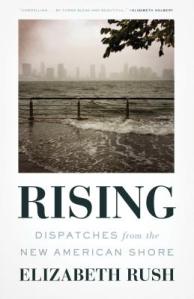 the premise: Author Elizabeth Rush reports on areas on the East Coast, Gulf Coast, and beyond that are threatened by rising seas and climate change. From worsening natural disasters like hurricanes to islands literally drowning beneath incessant waves, Rising is a polyphonic portrait of a world on the brink of change.

why I’m excited: Excited is perhaps the wrong word for this one, as climate change is an issue I’m deeply worried about, and I think this book will cause me no small amount of anxiety. But I’m looking forward to immersing myself in Rush’s reporting and educating myself on what’s happening on the coasts. I currently live in Minnesota, which is about as far from an ocean as you can get in North America. (We have Lake Superior, but that doesn’t count in this case.) I’m not affected by climate change with as much urgency as the communities Rush documents are, and I consider it a duty to inform myself. Every review I’ve read of this book does praise Rush’s skillful, lyrical writing and interviewing, so I hope it won’t be an entirely self-flagellatory exercise. 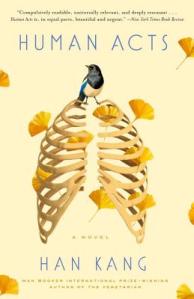 the premise: Set against the backdrop of the bloody 1979 Gwangju uprising in South Korea, Human Acts is a series of interconnected stories about people desperately trying to make a difference–and survive. It spans three decades of lead-up and follow-up to Chun Doo-hwan’s declaration of martial law that led to the deaths of anywhere from 160 people to around 2000. (For more information on the premise of the novel, the history of the Gwangju uprising, and Han Kang’s personal connection to both, I recommend reading Min Jin Lee’s excellent article, “Korean Souls,” in the New York Review of Books.)

why I’m excited: I remain obsessed with Han Kang’s novel The Vegetarian, which I reviewed a few months ago as “extraordinary and…nauseating, like a spinning theme park ride with its speed cranked up one level past safety.” Where The Vegetarian was almost claustrophobically personal, Human Acts appears to break wide open, encompassing more stories and larger events. Also, I know embarrassingly little about the history of Korea (especially South Korea), and I’ve recently found fiction to be a good way in. From Mary Lynn Bracht’s White Chrysanthemum (about Japanese occupation and comfort women) to The Hole by Hye-young Pyun, which I wrote about in a previous Friday Bookbag, I’ve been striving to read more works by Korean and Korean diasporic authors, and I look forward to adding Human Acts to that list.

Driven: A White-Knuckled Ride to Heartbreak and Back by Melissa Stephenson 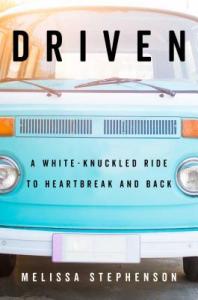 the premise: For Melissa Stephenson, cars are (and were) an escape, from her blue collar childhood in Indiana, to her brother’s suicide, to camping trips with her kids in a VW bus. Driven is a memoir of her relationship with her brother and her healing after his death, structured around the cars she’s loved over the years.

why I’m excited: I can’t say that the “cars” part of the premise sets me on fire. My partner’s a mega-gearhead, but I’m not. This memoir seems to be about more than cars, though. It seems like it’s also about family, and healing, and independence, and how sometimes running away from something can also mean running towards our better selves. It’s being billed as similar to Cheryl Strayed’s Wild, a book I adored. I certainly hope it scratches the memoir itch I’ve had recently. 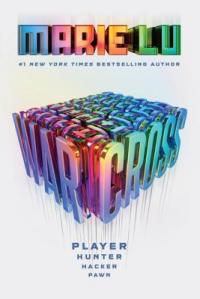 the premise: Warcross is an immersive international video game sensation: think Fortnite meets Overwatch meets World of Warcraft. Emika Chen is a hacker and bounty hunter who scrapes out a living hunting down people who bet on Warcross illegally, but she risks it all when she decides to make quick cash by hacking into the Warcross championships. She’s caught–but instead of getting arrested, she gets an appointment with the elusive founder of Warcross, who offers her a job in Tokyo as a spy…where she uncovers fortunes and dangers greater than she’d ever imagined.

why I’m excited: It’s hard to beat a good YA sci-fi thriller–they’re like a surprise trip to an amusement park in the middle of a dreary reading schedule–er, work week. I’m especially excited about this one because I loved Marie Lu’s Legend series (Goodreads) when I was a teen, and also because Lu worked in video game design before she was an author, so I think Warcross will be full of cool (and maybe even accurate!) details.

The Occasional Virgin by Hanan al-Shaykh 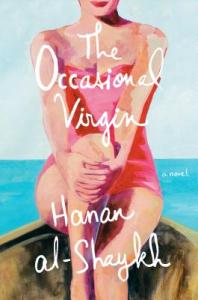 the premise: Two women–Yvonne and Huda–were raised in restrictive households in Lebanon: one Christian, one Muslim. When they meet on vacation in Italy, their complicated pasts threaten to interfere with the powerful and successful professional lives they take pride in now.

why I’m excited: I enjoy fiction that delves into religion and its effects on our lives, and I especially enjoy that one protagonist is Christian and one Muslim. Christianity and Islam are so often set up as an either/or that a novel that deals with their similarities is hugely exciting to me. I also love novels that explore how the values we’re raised with can interfere with the values we wish to have now. This novel could turn out to be sloppy or melodramatic in execution a la The Woman Next Door by Yewande Omotoso (which has a semi-similar premise), but I like the idea enough to give it a shot.